The Division of Physical Chemistry is hosting the following oral symposia, consisting of both invited and contributed papers, as well as a general poster session:

This symposium will showcase the quality of physical chemistry research occurring at primarily undergraduate institutions (PUIs). There is a large, and growing, cohort of research-active physical chemists at PUIs and it is important to provide an opportunity to highlight this work at a national meeting. This symposium will also provide insight into PUI careers for graduate students and post-doctoral fellows, and will include experimental and computational research across the subdisciplines of the PHYS division. This symposium will provide an opportunity for PUI faculty in the PHYS division to gather and present outcome-oriented research accomplished in collaboration with their undergraduate students.

ADVANCES IN NONLINEAR OPTICS AT INTERFACES

Interfaces are of fundamental importance in catalysis, energy storage and conversion, biological processes, environmental issues, and technological problems such as oil extractions. Understanding the molecular behaviors at interfaces is essential for both basic concepts and industrial applications. In the past decades, powerful nonlinear optical spectroscopy techniques have been developed and applied to reveal behavior of interfacial chemical systems on the molecular level. This progress deepens our fundamental understanding of interfacial chemistry and physics.  This symposium will bring together both theoretical and experimental physical chemists who are interested in interfacial chemistry and physics.

PLASTICITY OF ENZYME IN FUNCTION: EXPERIMENT AND THEORY (Virtual Only)

Tremendous progress has been made in recent decades and has contributed to the understanding of the role of protein plasticity in the function of an enzyme, such as ligand binding, catalysis, allostery and even regulation of enzymatic activity by post-translational modification. Recent efforts are focused on the design of new enzymes by directed evolution and/or in silico, but most of these efforts result in lower activity than natural enzymes. The fundamental problems in obtaining greater enzyme activity are the role of protein dynamics in natural enzymes over designed enzymes and the incorporation of this knowledge into the enzyme design procedure. In this symposium, we will bring together experimentalists and computational enzymologists to discuss the current status of research on protein plasticity in enzyme action, conformational heterogeneity at different functional states, and their contribution to the difference between natural and designed enzymes. In the end, this symposium will identify important new directions and guide our research in enzymology and enzyme design.

Simulations of complex materials with large numbers of atoms and for long times requires the use of force fields. Over the past decade, significant advances, including the use of machine learning techniques, have been made in the development of accurate force fields based on data from high level electronic structure calculations. QM/MM methods play an important role in modeling processes involving the breaking and formation of chemical bonds, and there is considerable interest in improving the quality of the force fields used in the embedding and in describing the coupling between the QM and MM regions. The grand challenge remains the development of force fields that can accurately describe bond breaking and formation without employing a QM/MM approach, but here too important

advances have been made. The symposium will bring together researchers developing state-of-the-art force fields and those involved in developing simulation techniques that allow the efficient use of these force-fields on large-scale HPC- and GPU-based compute environments to allow more realistic simulation of chemical, biological, and material systems.

Electronic structure theory contributes to the advancement of chemical science in two distinct ways. The first is the development and use of conceptual models as a foundation for chemical reasoning; the second is the development and use of computational methodologies to accurately predict the properties and reactions of molecules. Although tremendous progress has been made in the past three decades in the development of computational methodologies to accurately solve the electronic Schrödinger equation, the dominant orbital theory is still based on simple molecular orbital (MO) concepts despite the fact that many molecules and molecular processes cannot be adequately described by single configuration molecular orbital theory. The symposium on Orbital Models in Electronic Structure Theory in the Physical Chemistry Division at the Fall 2021 American Chemical Society Meeting will focus on the role of orbital concepts in electronic structure theory and the development and use of advanced orbital theories to understand the underlying causes of molecular phenomena.

ELUCIDATING THE INTERSTELLAR AND CIRCUMSTELLAR CHEMISTRY OF SILICON (Virtual Only)

Organosilicon molecules such as the cyclic silicon dicarbide (c-SiC2) and bicyclic silicon tricarbide (c-SiC3) are ubiquitous in the interstellar medium (ISM) and in circumstellar envelopes (CSEs) of carbon stars such as of IRC+10216 (CW Leo), but their formation mechanisms have remained largely elusive until now. An investigation of these processes is of fundamental importance in initiating a chain of chemical reactions leading eventually to the formation of organosilicon molecules – among them key precursors to silicon carbide grains – in circumstellar shells contributing critically to the galactic carbon and silicon budgets with up to 80% of the ejected materials infused into the interstellar medium. This symposium will provide a forum to address new findings on the observation (space, laboratory, computations), formation, reaction dynamics, and photo chemical reactivity of silicon-bearing molecules – primarily hydrogen deficient chains and molecules with exotic chemical bonding containing silicon – in interstellar and circumstellar environments in an attempt to eventually constrain the pathways to silicon-carbon bearing molecules in our galaxy.

Recent experimental and theoretical developments embolden our community to imagine the revolutionary possibilities that could be created by the capacity to design and realize coherent states that selectively deposit energy into specific reaction coordinates that may direct the subsequent electronic and vibronic dynamics. Directing molecular and nanostructured species in this way could upend conventional molecular intuition, which is largely grounded in thermodynamic and kinetic constraints. The capacity to design molecular coherences could thus enable the fine control of energy and charge migration, potentially freeing these processes from condensed-phase energy dissipation, and could lift some of the constraints of Boltzmann statistics, transforming our ability to manipulate the structure and dynamics of matter. The symposium will explore progress in molecular and nanoscale design and synthesis, electronic and electronic-vibrational spectroscopies, pulse-EPR spectroscopy, and theoretical/computational quantum dynamics that are being brought together to unmask the coherent flow of electronic excited states and of charges, along with their coherent spin-spin interactions, to realize novel quantum dynamical effects at the nanoscale.

Contributions from all areas of physical chemistry are highly encouraged for the poster session.  If held in person, up to six awards will be given for exemplary work. To be eligible for the awards, the presenting author must be a graduate or undergraduate student at the time of the poster presentation and must be present during judging. 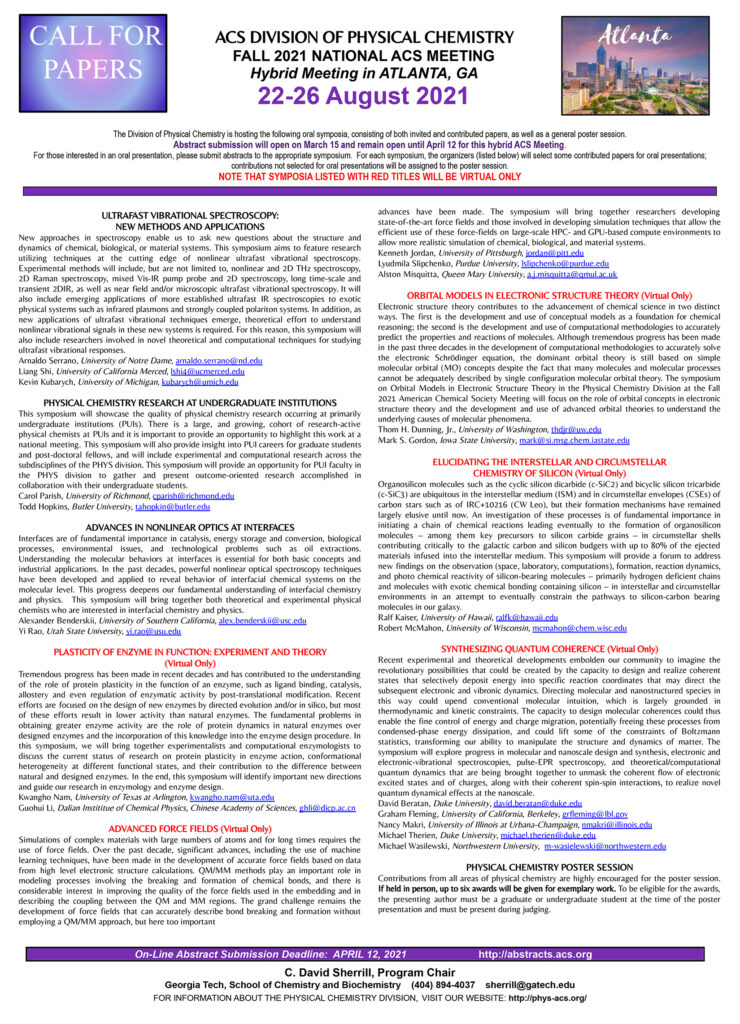